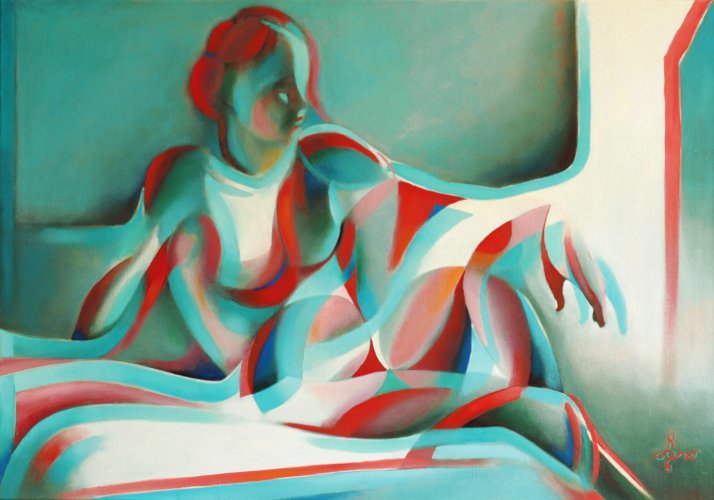 This oil painting Anaglyphical Roundism – 27-07-22 is my next project after ‘Golden – 18-07-22’. That one kicked up a lot of dust. Of course I like to vary so this time it was all about cubist styling again. Chosing a theme proves to be difficult because I made so many graphite pencil drawings yet to elaborate yet. For no particular reason I chose ‘Tribute to Man Ray (Lee Miller) – 22-04-16 (sold)’. Particularly that one I always like a lot in spite of the fact that I sold it only years later. Maybe a recognition by the public of my abstracting endeavours. In particular I sought abstraction in keeping bodily features open and let them communicate with the negative space around them. The hand leaning over the absent knee almost is a laugh. However I don’t think adding more knee was necessary.

All very fine but what to do next? Since I started to do merely oils this year based on previous drawings., I put myself in new trouble. Often I feel bad about sheer copying a theme, even if it is my own drawing. I take pleasure in inventing stuff and I was wondering what value I could add. Obviously that would be color but what scheme? I happened to go to Museum Kranenburgh in Bergen where I wanted to see Leo Gestel’s Mallorca series. It very well may be he could offer me some solutions. Next to the landscape paintings especially one Gitana portrait caught my eye. It contained an array of beautiful pinks, blues, purples and reds. So it came to be that I experimented with these colors. Very soon I found it the experiment was to no avail.

Colors are hard to get your head around, I think. It is not easy to find out why one color scheme is charming and the other daft. Perhaps I simply was trying to create a Gestel and therefor I shouldn’t have. I stepped out of bed and removed that coat and did a bit of meditation. In my mind’s eye suddendly my oil Anaglyphical Roundism – 12-05-22 came popping up. Surely I remembered making it was so much fun. At that moment (in the wee hours) I decided to use the same red / cyan combination and had a good night’s rest. Next morning I began and a few hours later I was satisfied with the result. Some bits and bots today and finally I like the result after some mishaps. They were necessary though in order to get to this.

I exaggerated the anaglyphic forms a bit more that the previous time. This gave me new forms, almost layered over the initial ones from the drawing. One could say that red and cyan are variations in color, yet they repeat eachother in junxtaposed, similar shapes. There was one more thing to deviate from. I used an app to get the first image of my anaglyphed drawing. Great to start with but it is created by an algorithm. It can only repeat itself. Therefor it was my task to deviate from it and depict some different forms and colors. Just like Sheila E fighting against the rock steady computer beat. Just to show I am human and an algorithm is not. Just because I can. Who is I?