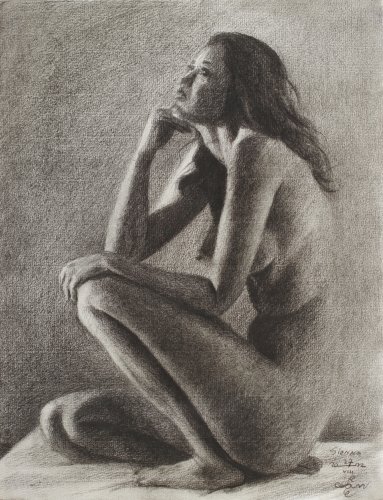 This graphite pencil drawing ‘Sienna – 25-08-22’ follows up my previous one ‘Model Study, after Laure Albin Guillot – 25-08-22’. In my last art statement I already described my impressionist approach, employed almost by chance. This time my realist / impressionist moves were planned. Suddenly I realized these styles were a thing from the past to me. It seems almost decades ago. Now and then I sketched in a realist style for commissions. However, with the Ingres paper below my fingers it is jolly good fun to make some more.

Years ago I went to an exhibition of Seurrat at the Kröller Muller museum. There I happen to see some of his drawings too. They made a hugh impression on me and since then I admire him as an expert draftsman. One of the things that struck me that his forms lack harsh contour delineations. Quite contrary to many a drawing I made in the past. Certainly I like them straight, abrupt next to smooth transitions between them. On the other hand, the Ingres paper almost seem to drive me right into Seurrat’s arms. The ribbed paper structure allows soft gradients or put differently, abrupt delineations are much more difficult to draw. Therefor, this drawing may not resemble his drawing style but smooth gradients I made were inspired by him.

There is this photographer on Deviantart.com I started to follow recently, under the nickname ‘CapitalistTools’. We had a discussion on one of my drawings and when I visited his page I immediately was charmed by his work. With his permission, I decided to use one of his photos as a reference for this drawing. The model from his Sienna series was photographed with a feel for soft tonal gradients. This and my impressionist whim of late were the impetus to create a soft impression.

"This is a warning"