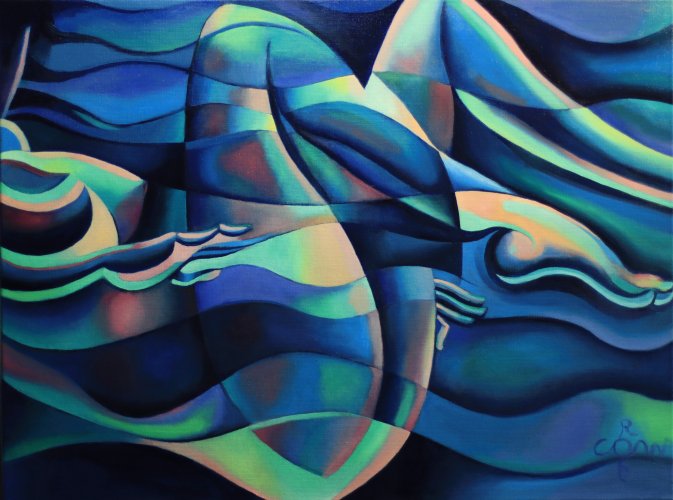 This oil painting I would like to call ‘Rusalka’ in honor of the latest developments in Ukraine. It is an elaboration of my pastel drawing ‘Free Floating Blue Wave Nude – 10-02-21’. That one was based on a previous graphite pencil drawing ‘Roundism – 19-07-16’. It is one of those rare examples of doing one motif in all three mediums I came to master. Why this specific painting right now, one might ask. Well, after my last painting ‘Risque – 22-02-22’ I was in for something new. I felt I had exhausted that specific color scheme of reds, greens and yellows for the time being. Maybe it was that I also had to overcome some challenges on a level of color saturation. That is why I wanted to refrain from using reds this time and use to a new color scheme. Perhaps I wanted something cooler, more mysterious.

Then all hell broke loose and the Russian-Ukrainian war started. Nevertheless did I have the color blue in my head for weeks now. Strange and how great our subconsciousness seems to work. The blue and yellow in the pastel may have reminded me to the Ukrainian flag somehow. The theme doesn’t have to do anything with the current war started by Russia at first sight. Then I remembered some of these Slavic folklore tales, stacked with goddess, nymphs and nixes. There was this thing about mythical mermaids. I guess they are present in many legends all over the world but a specific one I recalled: Rusalka. The Ukrainian tale talks about a young women that drowned in a river or lake and came to haunt it. She is not necessarily malevolent but you’d better be aware when you put your foot in the water as a young Russian soldier.

How Blue Can you Get?

Apart from the politican and mythical aspects I used cooler (reddish) and warmer (greenish) variations on the color blue. It’s an old trick to get more vividness. The complementary reds and greens in the skin do the trick for the most part. It is also possible to get this complemenetary effect in one main color as well. A kind of double whammy. The yellow parts in the waves adjacent to the blue ones remind me of the Ukrainian flag, Hence Rusalka. For that purpose I use a bit more yellow than originally intented.

All of this takes me back to the 1990s when I studied International Law in Leiden. After the fall of Berlin Wall in 1989 I was highly motivated to contribute to a new world order. One in which the rule of law would prevail and the last of dictatorships would finally disappear. Who could then have forseen yet another system of oppression following up the old communist one? What does it take for mankind to realize the rule of free choice in a democratic society is the only way. These days I am a middle-aged artist, not a lawyer anymore. My contributions are merely artistic. They say one image sometimes can say more than a thousand words. Let us hope this painting contributes to peace. Perhaps Putin can be lured into Rusalka’s realm. I tell you what: He can get this painting for free if he ends this war.