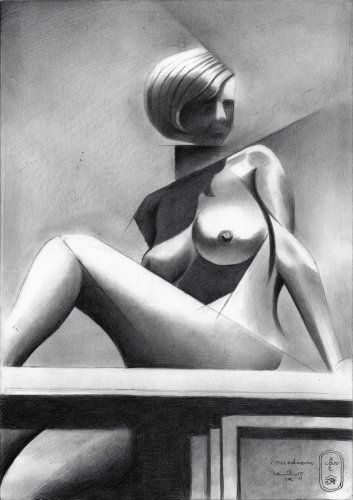 Another roundism drawing I fancied to make. The immediate cause was this great vintage picture of a nude on the roof top of an open van.. The woman has great nipples and I guess I will not post this one on some of the social media. Too bad though. It seems the sexual revolution is extinguished. Next to that, the love for the human body and its aesthetics, already died when Word War II started. What is left is distilled to being either porn or prudity. It makes me sad. Who can refute such a beauty? She does not necessarily have to excite you sexually but she can make you smile. Perhaps you just admire her bodily features and perhaps decide to join her in the nude? Not necessarily to chat her up but just for a chat.

Besides my fulminations I just liked this composition because it is not a common one. I liked the styled planes it already showed. There were the squares in the open door, some round ones in the model and some great diagonals. The light-dark division in her leg shows the same division as in the roof style of the van. The contrast in round and straight I also like. All basic geometrical shapes like the circle, rectangle and triangle are to be found and well balanced. I was in a geometrical state of mind anyway after my graphite pencil drawing ‘Roundism – 03-09-19’.

I turn her right nipple into a head of a hexagonal bolt. Strangely such hexagonal shape can be discovered in the torso or did I associate the nipple with the torso subconsciously? I don’t know. Perhaps there are similar bolts to be found in weapons, explicitely present on the aforemeant social media. Something to ponder about when you refute nude next time?