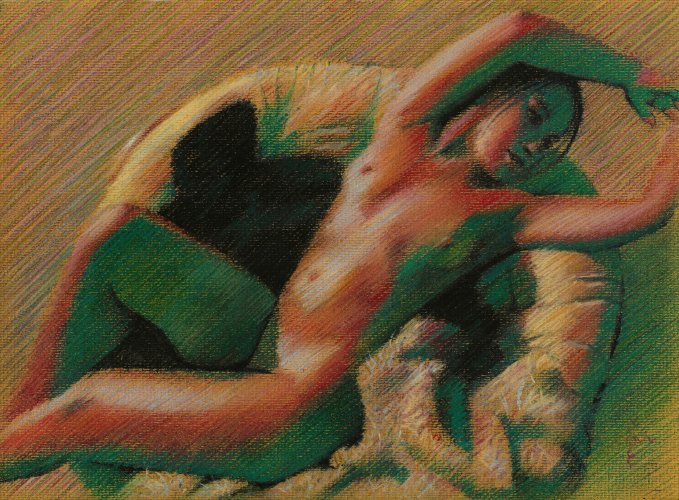 Once in a While a Pastel

The first pastel drawing in the Risque series and was long overdue. At the beginning of February I started this one just to fill the time waiting for my students. Originally that is how the stream of graphite pencil and pastel drawings started. There were mere prestudies for oil paintings to come but happened to become the main body of my art works. Still prestudies though and almost two months ago I started to elaborate them in oil. There will come a time when I will return to drawing much more. All the more fun to do one once in a while. This is one of them and my first pastel after my live pastel drawing called ‘Model Session with Julia – 31-12-21’.

Perhaps you have recognized the very chair. It’s the same one as in the other Risque paintings and aforementioned live pastel. This time I more of less used the same color scheme as in Risque – 22-02-22 and Risque – 17-02-22. At Goedman I bought a new block of Ingres paper some time ago. When I saw it on the shelf that immediately took me back. I made some self portraits in the early 1990s but never used this particular kind of paper later on. It has lots of hidden and darling qualities that lay over the  threshold of many a difficulty to overcome. Such are its unforgiven character and low resolution It forces an artist’s mind to go abstract over things and refrain from throwing in details too much. The paper I used was a smashing mustard yellow-green.

As stated hereabove I used the same color scheme just to be able to link up with the previous oils. See how it would work on Ingres paper. As to the composition I had Julia take a slanted position. That way I had a great diagonal body position stretched out all over the image plain. The position also took care of a lovely division of light and dark plains. The reds and greens took care of the rest. Oh boy, what you can do with a great model!