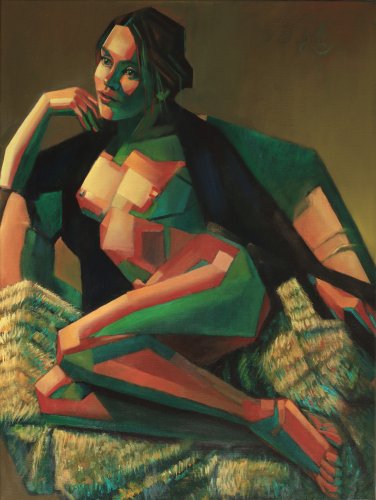 A new Risque oil painting in the Series by same name. After my last one I wanted to wander in a straight linear landscape again. Variation is the spice of life. Besides that, I bought myself some fine straight brushes I can lay squarish strokes with. The motif for this one was based on my colored pencil drawing ‘Risque – 01-22’. That was expressionistic and without a cubist styling because the resolution of the batches strokes simply didn’t allow it. It would have been too much of a good thing. I noticed the hatching technique I developed throughout the years is more suitable for realistic depictions. Not in this oil though. Here I could lay nice thick and straight patches.

In Roundism – 04-02-22 I used a new color palette consisting of Pozzuoli Earth, Pompean Earth, Yellow Brown, Nickel Titatium, Sevres Green, Perilene Black and Ultramarine. Something different from previous color schemes but I liked it that much that I do once more. Perhaps there will be a whole series with this new palette.

Sometimes there are reasons one only can fathom consciously in retrospective. My model Julia is dutch but Ukranian of origin and obviously she worries about the faith of her fatherland nowadays. Will the Russian invade it or will diplomacy solve the issue according to the principles of brinkmanship? As a trained artist I am used to convert what my senses tell me into stains of paint. Colors are relations I tell my students often. This complementary color scheme red-green seems fit to express her supposed double feelings towards the resulting situation. In my eyes such color schemes seem to express agression but also passion, alertness and vividness.

But look again: I made these reds and greens entwining eachother like dervishes dancing. Saturated and unsaturated variations are complementing eachother much more subtlely, almost resembling and approaching eachother. I like this play of apparent contrasts. Perhaps The Russian and Ukranian one day can see they complement eachother as well. Nothing contradictory unless there is agreement at the same time. My array of reds and greens in all sorts of tones and hues might inspire presidents Zelenskyy and Putin to see their relationship should express Khalil Gibran’s view. Better to quote than to paraphrase him: “And stand together yet not too near together: For the pillars of the temple stand apart, And the oak tree and the cypress grow not in each other’s shadow.”

Oftermist- the home of art by Trevor.