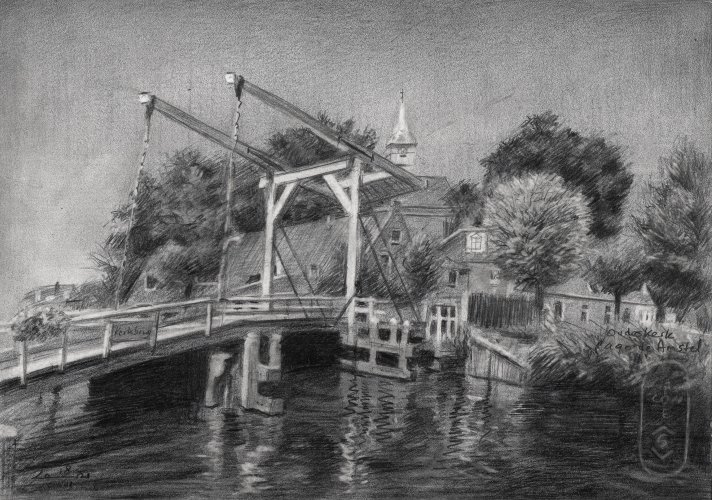 Last Saturday I went to the Heineken Music Hall near the Johan Cruijff ArenA for my second vaccination shot. On the other side of the A2 there is Ouderkerk aan de Amstel, a village to the south of Amsterdam. After teaching art class I had some spare time and thought why not pay it a visit?  Not exactly on a whim though. The Dalai Lama’s advice for a happy life is to regularly visit a place you have never been. That one pops up in my mind quite regularly. Such a village often is passed by car all too quickly and I am always on the look for interesting motifs. In other words, no particular reason to visit it and therefor a good reason to do so.

Ouderkerk is flocked by tourists nowadays. I could tell that right from the start but still an interesting place to visit. The Kerkbrug and the canal in front of it drew my attention as a theme. Probably a previous sketch of Rotterdam was on my mind but I was not satisfied after a first session. It needed more and so I worked out much of the shadings, reflections and tree tops a day later. On some spots I kept a rough edge though, like in the house in the back at the left. All-in all it became an impressionist view rather than realistic, I think.

What attracted me further was the compact view on the village entrance consisting of roundish tree structures alternating straight roof top lines. The bridge plays the leading role though. Its diagonals lead the viewer straight into the dense myriad of suggested details in the middle of the drawing. The water reflections serve as some kind of prelude for what lies above. Besides that, I find these merky and deep waters uncannily attractive. On the other hand they also bring tranquility and beauty to the scene.