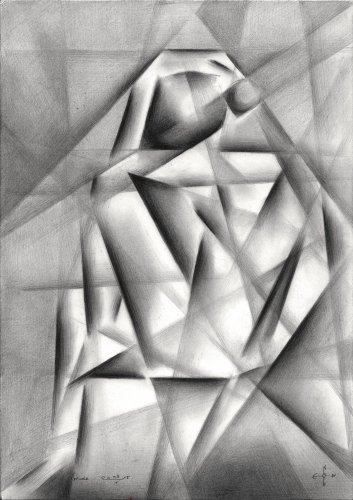 (Variation 11 on the same theme)

Nude variation 11 shows a return to straight lines and planes. It is quite different from the initial graphite pencil drawing ‘Nude – 06-04-15’ that I began the series with. This time I wanted to put less stress on the body and more on plains as a whole. Accordingly I extended linear structures inside the positive form and let them run outside it. My goal was to let bodily structures and plains communicate with counterparts in the negative space.

Another goal was to render the body and its features like limbs less recognizable. Not that unrecognizable though so people still could detect the general impression. This was drawing on the brink of the scope of my abilities. I had to abstract it to the extent peripheral looking could spot the body but not through focusing on specific areas.

At the End of the Series

I remember after the completion this drawing I was a little fed up continuing thes series. However, I made two consecutive drawings. The last was Nude – 18-05-15. Then, after a full year I made another one and four paintings. Quite a series I think and it brought me some new regards on my art.