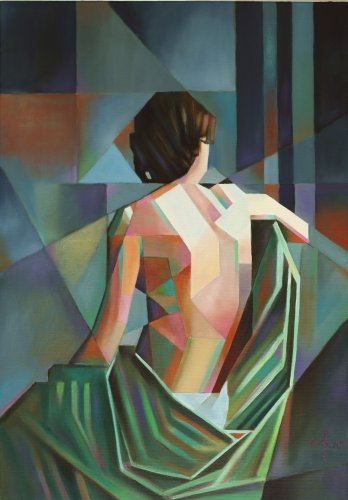 Surely it is time to pay homage to Eugène Durieu, especially his photograph of a seated female nude. First I made a study in graphite pencil last year. By clicking the link you can read on the who and the why, otherwise I would introduce him twice. As for now, since the completion of my Risque Series I am selecting multiple drawings from the recent past. Some posts ago I explained that from last February on I am converting my drawings into oil. There are simply too many good ones to ignore, some better than others of course.

This time I found it was time to return to straight cubist planes after the latest anaglyphical experiment. My initial cubist styling was all straightly lined up, roundism came later. I don’t know why I would like to return to that initial styling again. Maybe it was that some time back I finished Ode to Tamara de Lempicka – 31-03-22 and I liked the result. In the back of my mind I kept the intention to do another one of the kind shortly.

It is what I am used to do with different sub-styles I developed through time. Furthermore, the task I set myself was simple: Display the female form in the cubist style and for the rest give it some kind of realist look. It is a slight deviation from my first cubist paintings such as Cubist Nude 01 (2013). The latter has much more color saturation and it was time for me to turn a different corner. I used slightly less strong colors in order to match with a more realistic look. See if I could get away with that.

You see, we as artists always play with the imagination of people who watch our paintings. Rubbing them the right way they will be able to see more than the painting actually lets on. Therefor I present figuration on the cutting edge of recognizing the female form as well as aesthetic cubist planes. Both at the same time. From early childhood on we have learnt to associate forms with what they represent. In fact we simply equate these associations with the names we have given them. I try to rip them apart a bit. So, don’t you agree there is a narrative in my kind of formalism?