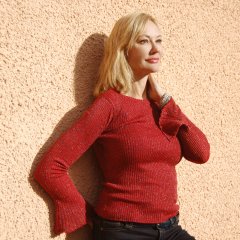 Mónica’s art career started as a child, so to speak. Her talent was innate, although later on she took courses at Paris L’École des Beaux Arts and studied with reknown painters in France. She started exhibiting her paintings when she was very young, and then she had group and solo exhibitions at different galleries in Holland, Great Britain, France, Costa Rica and Spain. A number of institutions own her artwork too, such as: Monaco Museum of Modern Art, Latinamerican Art Museum (Florida, USA), Hewlett-Packard Foundation France, Museo de Arte Contemporáneo de Zarzuela del Monte (Segovia, Spain), and Museo Casa Orduña (Alicante, Spain). After a voluntary hiatus to dedicate herself to writing and publishing her books, she has now returned to her first love, which was painting, from a more spiritual and evolved perspective than ever.