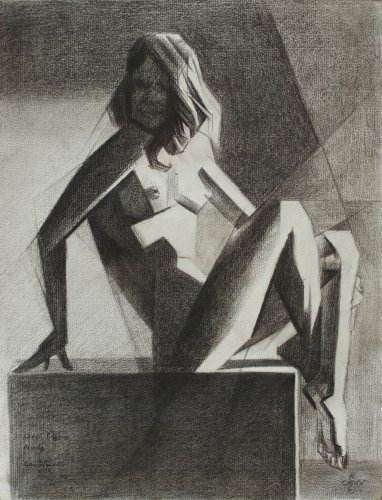 This drawing ‘Art Deco Nude – 20-08-22’ is the third one in a row inspired by a Walter Bird photograph. However, after the last graphite pencil drawing ‘Roundism – 17-08-22’ I felt it was time to vary in style again. Strange how my inner urge works that way. So, straigtness instead of roundistic shapes. With both I have the intention to suggest roundness in shapes though. Perhaps my Roundism variations only get a bit more decorative. Maybe that’s is why I like to change. I don’t want Roundism to become over-zealously and explode into sheer exuberance. It could only lead to a collapse under its increased pumped up mass like a star becomes a black hole.

In my last statement I already mentioned I was going to do another picture by Bird’s. There also was a different reason to do so. I recognized the model in the reference picture. She was the same I used for my oil painting ‘Loving the Alien (2011) (sold)’, sitting at the same cube. Back then I didn’t take notice. Consequently that also must be Walter Bird’s picture, even though the title to the picture suggests it’s from 1938. I always thought it was a contemporary photograph because it looks so modern. Immediately I have my oil painting ‘Homage to Alma Tadema – 02-08-22’ in mind. The reference picture from that one also looked very modern, as if taken yesterday. Could it be that all great works of art keep on looking contemporary? They convey beauty as infinity.

Being the photograph as it is, perfect, it seemed impossible to add something. Of course the model is perfect as such, being slender and well proportioned. It is exactly that I set out to put the stress on. Hence the vertical and the emphasis on the feet and hand in straight planes. I did a bit of elaboration of facial features because those were a bit too dark in his photo. It also counterbalance the impressive feet.