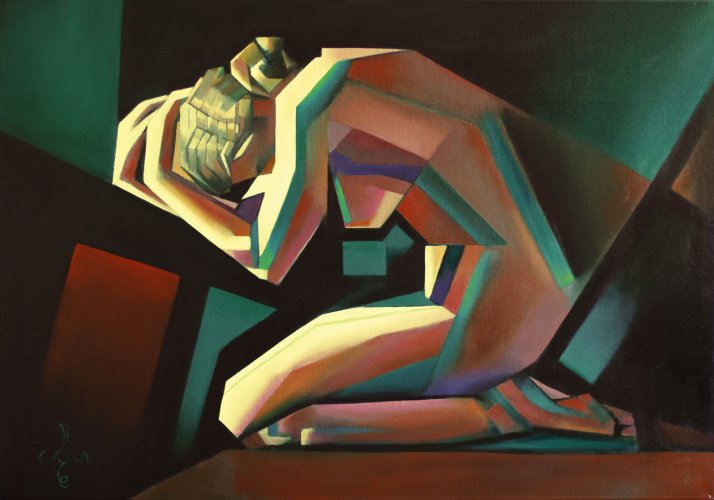 This oil painting ‘Art Deco Nude – 14-08-22’ is based on my graphite pencil drawing ‘Art Deco Nude – 05-08-22’. I liked that one and saw the potential for an oil. So I postponed an imminent project (Homage to Alma Tadema). For that one I already had a preparatory photo shoot with my model. But first things first. When it’s cooking perfectly you have to serve quickly. The same vibe I got discovering the potential of new drawing materials I had creating this oil. Therefor no delay and lo and behold, I cut to the chase like a knife through butter.

Before you admire my self-proclaimed pinpoint accuracy I have to state that I had to make some amendments. I found the linear structures extrapolated into the negative space around the female form a bit too harsh. Strange how straight contour delineations can create the illusion of soft, roundish forms. I had to abandon these sharp chiaroscuro planes around the body. The solution was to create some blocks of red and green planes floating freely around the female shape. I kept the triangle stemming from her back though, as a reference to the drawing. However, I did tune it down from a tonal point of view.

For no particular reason I had some kind of vintage look in mind. I wanted a color scheme resembling old Victorian brass instruments. Sometimes they seem to be lackered to a greenish patina. I simply love those because I can imagine such bygone eras most vividly. They also remind me to my parttime student job as suppost in Museum Boerhaave. They have many such objects on display, such as microscopes and telescopes. Serpentine or marble statues from the Art Deco era also came to mind. Consequently I used Turmaline green next to Sèvres green for the lighter parts. I counterbalanced these green with an array of reds, varying from almost orange to pink. My favorite Nickle Titanium yellow I used for the highlights. The result looks mildly complementary. The orange and brownish reds soften these contrasts a bit. I liked what I got: vividness but also a harmonious impression.

These colours also match my attempt to capture human emotions in planes, seeing both at the same time. I am utterly fascinated by the transition of forms in what we associate with them. Normal people (not artists) take these associations for the actual forms. Not me, I dissociate and take back what is stolen from babies. They see only forms and don’t know the meaning of them. Therefor, from an artistic point of view it is ridiculous to paint a human body.

The drawing and painting are inspired by Walter Bird’s 1938 photo of model Rosemary Andree, called ‘Pocet Venus’. So my thanks go out to him and all artists from the Art Deco era in general. Back then they knew to combine craft and innovation perfectly, unlike the trash served as art today.