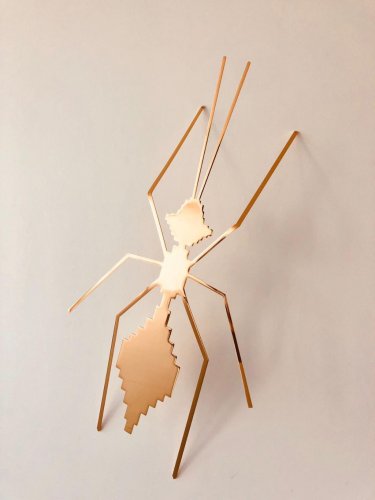 The starting point is a human-sized ant. Carlo Pecorelli chooses the ant because for these creatures the good of the individual corresponds to the good of all. This is not the case for man, for whom it is not innate to find agreements just as it is not natural to have the common good as the main objective. Hence an ant that reproduces in the forms a giant version, of human size, as a warning to man, more and more individualistic and projected on his own person.

Carlo Pecorelli chooses soft, curved lines for the formica, reproduces it in scale while maintaining volumes and shapes.

Then, over time, these lines lose in curves and volumes to become more and more essential, the three-dimensionality disappears, the details are reduced, almost eliminated, everything is simplified to arrive at a steel plate, flat, flattened, compressed, without details, almost without matter.

It is no coincidence that the ant, despite its mutation, takes on this title.

Pixel is the unit that makes up an image, it is the constitutive cell, the essence, the primordial form and at the same time the result of a purification process that follows a crisis experienced by Pecorelli. This crisis is determined by a crushing, we could say symbolic, that Carlo as a man feels he is living, a crushing caused by conditioning and addictions which, like boulders, limit his freedom.

The ant has thus become human and as such it undergoes this crushing, this flattening, which is reflected in a life now devoid of values ​​and moral principles for the individual.

For the sculptor, several elements produce the crushing. The first is our system focused on the consumption and production of goods.

For decades it has been thought that well-being depended on economic growth and progress, and that if the individual produces and consumes, he is better off and lives better.

In reality this has proved illusory: if world wealth has increased, income and life expectancy have decreased. Inequalities, environmental degradation, poor people have increased.

Carlo argues that needs are almost exclusively focused on the economy.

Continuing his analysis, he argues that another element that determines the crushing is progress which for some aspects undoubtedly makes life "easier", but for others it has a profound impact on social dynamics, on the perception of the world and of oneself .

We cannot deny that technology has changed the way of living human relationships, originally made up of dialogue, comparison, exchange, made up of moments of pause, of elaboration, of reflection.

Technology predominantly enters our life, invades our vital spaces and distracts us from our thoughts, our moods. The result is a loss of concentration, a greater superficiality, the end of contemplation. Pecorelli denounces the loss of the freedom to think with one's own head, of critical thinking, but above all the loss of time and space to filter thoughts and emotions. We stop on the details but we lose sight of the whole.

The economic system and technological progress act simultaneously in oppressing, reducing the personal freedom of the individual, in crushing a sheet of steel until it becomes thinner and thinner.

These factors lead us to desire the superfluous by creating new needs in us which we then do not know how to give up. But the most serious aspect for Carlo is that this desire for the superfluous does nothing but increase that part of us that is more individualistic because he directs us to personal, individual, self-centered satisfaction.

The sculptor affirms that in order to lighten the “weight” that crushes us, we must learn to give up often useless needs, which invade our mental spaces. He believes that these needs are more often than not material, created to have more, not to be better people. It would be enough to have the courage to dwell in front of nature and what it is able to offer us to nourish and fill the void that is created in the face of dissatisfaction that arises from the same material needs.

Hence the geometric essentiality of Pixel's lines and shapes. It symbolizes a sort of purification that leads to man's freedom, as long as man desires it.

Hence the use of fluorescent colors that the artist applies to some works with the aim of urgently drawing the viewer's attention, in a race against time that risks making humanity lose, almost unconsciously, what it defines such.

Hence the use of gold in Pixel, a precious metal that represents the uniqueness of human life.

The artist's vision is however a vision of hope, man can recover.

From here, Pixel's forms are erected in an upright position, like a man, in a continuous evolution and in a new cycle of sculptures.