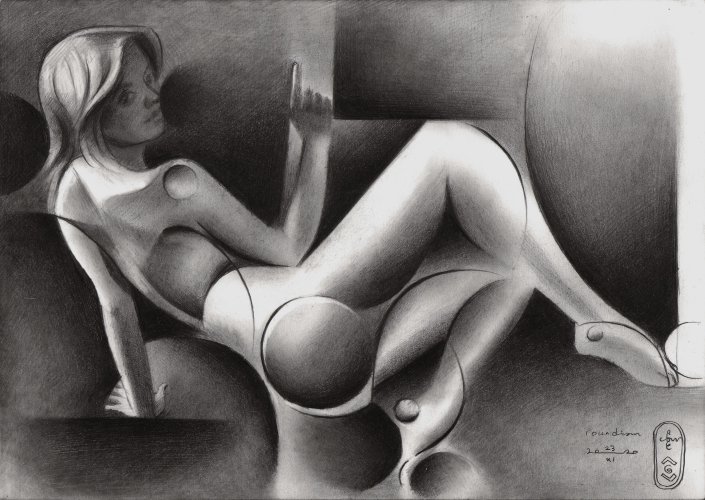 A new roundism variation in diagonals, horizontals and verticals. Sometimes you come across a great motif that stimulates to draw instantly. Centainly this one did exaclty that. The diagonally positioned back and legs contrasted the vertically held lower right arm quite nicely I thought.

However, I had to do more than only serve out what I saw and decided to counterbalance the slanted body position by adding dark vertical and horizontal blocks, encapsulating the body. By means of those I was enable to suggest some kind of a vague cross figure around her.

Compared to my previous graphite pencil drawing ‘Roundism – 15-11-20’ this one is more abstracted. However, the seed of the latter was borrowed and sown into this drawing. The straight angled thigh in the previous drawing therefor was the inspirational source that spawned this one.

Some Lines to Complete It

In the final stage of the completion of the drawing something bothered me. What if the blocks I hatched so very dark would feel like watching a massive lump? What would serve as a suitable solution? After examining some earlier work I came to realize that adding some linear structures would counterbalance the harsh cubist blocks. As a result the curvy lines to the left of the centre make a rudimentary cross as well.

At Last at First Hand

The left hand and the face I kept quite simple, since it was not my objective to render the model’s exact resemblance. It was all about the body position. Last but not least, I was not satisfied with the hand in the reference picture and decided to have her point only her index finger upwards. All good things come from up high?

GET TO THE POINT III