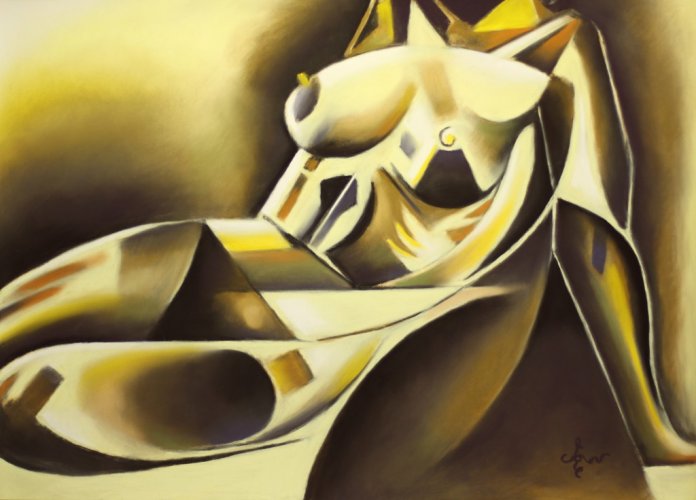 Addition to the Series

After my previous pastel drawing I decided to do a totally different one. Not in hatched strokes but smoothed out I had in mind. My graphite pencil drawing ‘Roundism – 31-03-20 (sold)’served as the motif. I was to execute it in bigger format anyway and thought that it could be an addition to the Golden Series.

Since the start of my quest in pastel I did not work on yellow paper very often. For some reason yellow is very hard to work with, certainly because it is so dominant. I once read that Carel Willink did not like it and/or adviced people to use it only in small quantities. In portraits it can make people look rather sick and that can be drag, unless you want Fauvism.

Give it a Shot

Then again, I took a closer look at my oil painting ‘Chinese Girl (2012)’ again and came to the conclusion that I had to give yellow a shot. After all, I had some Clairfontaine Pastel Mat sheets in yellow. They were not used yet and ‘Golden’ was on the menu right now. Besides that, the oil painting proved that if the overall base color is yellow it looks rather monochrome than yellow. The conclusion I drew was that yellow only shows its dominant face in relation to other colors.

My yellow intentions  caused me to pick up a yet unused yellow Unison stick. I did the bulk with that and added a lot of black in the darkest tonal regions. Later I added Unison purple extra dark next to the darkest tones. I look at some pictures of the nude in the Goldfinger movie. That is where I detected some dull greens, orange-like yellows and brownish oranges. Last but not least I added some Schmincke’s gold pastel touches. Unfortunately the golden sprinkles only can be detected when you move laterally in front of the drawing. Although I added all these other colors the pastel still looks monochrome which was my intention.

Anyone for a ride through the Milky Way?

Study for a Dress