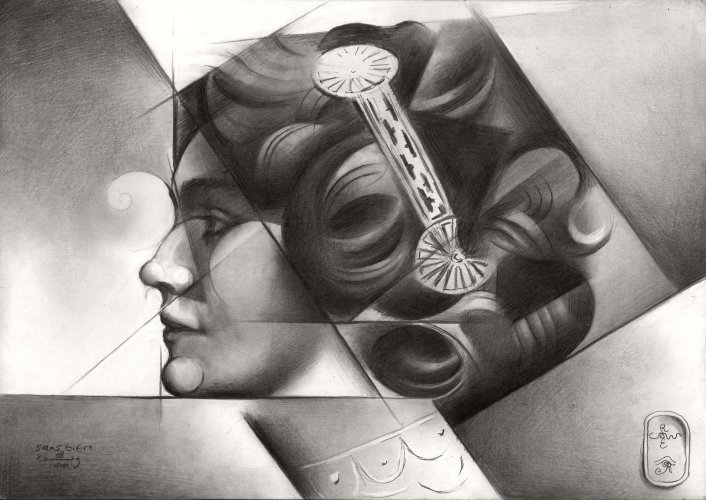 This drawing depicts Lily Elsie, Edwardian actress and singer. For obvious reasonsI liked the hair volume, its curls and plains. How much work was put into hairdos back then? Probably there were women who could have their hair fondled endlessly and many who had to work very hard. Anyway, more reason to extend the series ‘sans titre’ once more. It started with ‘Louise Brooks – 05-05-14’ although I did not called the series as such initially. After the first one I thought to called it ‘sans titre’ because I did not want people to compare the resemblance of the portrait to the portrayed. It was about my cubism style in the first place. In fact it is some kind of mixture of cubism and my personal style roundism.

In the compositionary stage I started, like always, dividing space into plains. All of a sudden I came to the idea to counterbalance straight linear structures with softer roundish blurs. Hence her fine features still would be captured while abstract essence will remain the dominant factor. Such is strengthened by the diagonal blocks next to her head. They conveniently break up an abundance of negative space that would be too much. Such are challenges put to the artist. If the portrait’s dimenions are too big then it looks rather canned. In the ‘ideal’ situation the portrait is granted the right to ‘breathe’ and communicate with the negative space. The consequence then is to do something with it. Leaving it untouched always looks daft too me and a portrait can look forelorn. You see, there are many problems artists have to face, not being evident to the untrained eye.